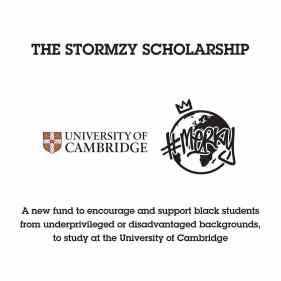 In light of the recent A Level achievements (2018), South London rapper Stormzy has launched “The Stormzy Scholarship- A new fund to encourage and support black students from underprivileged or disadvantaged backgrounds to study at Cambridge University”. Much praise has been given to the star, who has teamed up with Cambridge to offer the scholarship for two students applying for the prestigious university both this year and in 2019.

As wonderful and inspiring as this gesture is, like everything on the internet and in society, it’s not without its critics. Stormzy recently received a private message from a fan stating that they were dissatisfied with Stormzy’s choice to only open this to Black underprivileged students, asking why he hasn’t considered White underprivileged students. They expressed anger at Stormzy’s decision, claiming that they were no longer a fan.

I saw this post recently on Social Media, so I feel I need to put a disclaimer here. I cannot verify the validity of the post. It could be a fake, possibly conjured up to start controversy. Or, it could be completely real, a representation of the immediate thoughts of a group of people out there in the World Wide Web. Either way, it has provoked me to have a response. I will also state here that I use the terms “White” and “Black” people as very vague groupings (as the terms do not and cannot describe the vast complexities of race and ethnicity). I would ask you as an indiscriminate reader to focus solely on the points being made.

I will skip past the common belief that (some) White people are primed for success in our Western Society and that they already have a step up when it comes to getting jobs, building careers and receiving opportunities. Focusing on this could easily neglect that (most) people have to work their a$$es off to achieve anything in life. I’ll also skip past the fact that (some) Black people have a chip on their shoulder about this, as they feel there is less of these opportunities open to them. What I will focus on are numbers.

From what I have read (again, online) the scholarship is in part a response to Cambridge colleges not admitting a single Black student between 2012 and 2016. You can fact check me on that, but if it’s true there are also questions on why this is. Are the colleges just not accepting Black students? If so, there needs to be an investigation on their admissions processes. Is there a lack of Black people applying? I know when I was choosing universities I was encouraged by my 6th form college to apply for both Oxford and Cambridge; we even went on a school trip to visit Oxford University. At the time, I chose not to “waste” one of my potential places on these universities, partly because I wanted to stay in London, and partly because I didn’t believe I would get in any way. If this is the case, then Stormzy’s Scholarship goes some way to support those who can and desire to go on to achieve in their future.

The focus here (for me anyway) is that Stormzy is using his own success and putting his own hard-earned cash to independently support students who also want to achieve and succeed. Is this a negative thing? Of course not! It’s beautiful, not only to see humans supporting humans but to see Black people supporting Black people. There is a common belief that Black people have a propensity to mistrust one another, to not support one another and to actively bring each other down (ever heard the analogy of crabs in a bucket?) Here is yet another example that Black people can and DO support one another to achieve, showing a strength and solidarity that can often be ignored. Stormzy has not only shown that Black people should and do support each other, but he’s also added to a current wave of Black Love in society, alongside other cultural factors such as the rise in Black-oriented music in the UK (such as Afrobeats) and the natural hair movement.

But, let me play devil’s advocate for a second. Is Stormzy’s decision a racist one?

If it was the other way around, and a White star only offered the scholarship to “White” underprivileged students, would this be racist? I believe it would. I can already imagine the uncontrollable backlash and public outcry. So, is Stormzy’s decision racist? I would argue no because he is trying to re-address the status quo. When things are already unequal, can it be racist to try and create balance?

I’ll leave these loaded questions unanswered and allow you to develop your own view. The dialogue is open. I’m just happy for whoever gets the scholarship. I hope they go on to make a positive change in our society. The seeds are being planted and I am already proud.

Let us know your thoughts below